This is what it takes to be exceptional 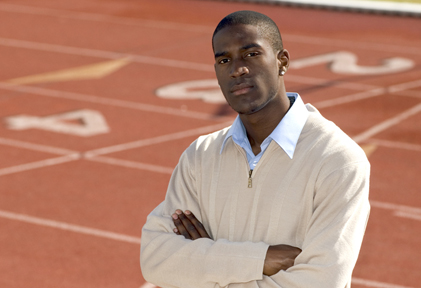 Cedric came to the US in 2004 on a track scholarship from Geneva, Switzerland. He didn’t speak English and had no friends or family in the US.  Despite the struggle to keep up with his athletics and academics, he managed to make the All American and All ACC during his first year at FSU. He went on to become captain of the track team, led the team to a National Title, and was a member of the 4×100 Meter Relay Team that broke the university’s record.

Cedric mastered the English language in short order. He was able to make both the Dean’s list and the President’s list before graduating. He majored in Information Technology and was awarded the 2007 Undergraduate Research and Creative Activity Award for a web application that he built for student-athletes like himself called the SportLog. Cedric chaired the FSU chapter of the Association of IT Professionals and increased its membership many times over.

Unsurprisingly, Cedric had several job offers on the table as he was preparing to graduate. He accepted a position with a large and successful professional services organization in South Florida. After quickly mastering the skills required for work, Cedric began training again for track competitions. Would you be surprised to hear that this has been a success? Of course not.

On August 1st of 2009, Cedric won the 100M Swiss Championship title. Jet lagged, tired, and sleep-deprived, he triumphed over the competition. This came at no surprise to me after seeing the video where he qualified for the Swiss Championship race. I’m not even sure why the other runners got out of bed that morning.

Cedric Nabe on the right, winning.

Cedric speaks four languages, has a beautiful daughter, and is deeply passionate about his Congolese roots. He waxes between hopeless optimism and heavy-hearted despair when discussing the atrocities taking place in the Democratic Republic of Congo (DRC). He’s among the most upstanding and driven people that I know, and I’d be remiss if I didn’t share his story here.

You’ll be seeing more of Cedric soon. On this blog, on YouTube, and probably on TV.